The 2020 season for Danes in eWINNER1

Danish riders are spread relatively evenly between the three Polish leagues with 6 in Ekstraliga, 5 in 1 League and four in 2 League. And in eWINNER1 this year two Danish riders stand out as top scorers in their team putting them on the top 10 of riders in the league.

Nicolai Klindt
First we can take Ostrovia’s Nicolai Klindt, who took home 6th spot in the individual scores with an impressive 2.135 heat average. It is an amazing feat when you consider that Toruń won the league with a team of riders who, more or less, were an Ekstraliga squad. It included such as 2012 World Champion, Chris Holder, one of the 3 riders above Klindt from the 1 League winners.

But the 31 year old Dane was able to hold his own against this top competition and finish the season well. Not only that but he also made great progress on his 2019 season where he came 19th in the individual table with a heat average under 2.000.

It was not just in Poland, but also in a Sweden that Klindt excelled. Racing with regular season winners, Gislaved Lejonen he also finished the season in the top 10 of individual riders with a heat average above the magic 2.000 mark (7th, 2.121).

The 31 year old usually rides in the UK Premiership. But one wonders whether that will continue in the 2021 season, when he has these kind of results this year that prove the “less is more” principle might be better for the Dane.

Andreas Lyager
The second best Danish rider in eWINNER1 was Andreas Lyager. Just 22 years, he raced his first season in the league after flourishing in 2 League last year.

For his club, Bydgoszcz, 2020 was a relegation battle which was won only in the final third of the season when they were 3W-1D-2L in their last six matches after a totally dismal start to the season where they hardly won at all. The primary catalyst for change was the return to the club of injured Frenchman, David Bellego. However, Lyager, was the stable force for Bydgoszcz throughout the season. For example, when they were thrashed 60:30 in the crucial away match at strugglers Daugavpils, it was the Dane who top scored with nearly half the team’s points with 13+1.

Surprisingly, Lyager did not have an equally successful season in Sweden with Vetlanda, but still improved on his 2019 season when he scored 0.900 to go up to 1.500 in 2020 for the same club.

Peter Kildemand
Perhaps one of the disappointments of the year (from a Danish perspective) was seeing Peter Kildemand’s results from Poland and Sweden.
This was the first year the 31 year old has not raced in Ekstraliga after 6 seasons in a row at the top level. And finishing as the lowest scoring Dane in the 1 League, 26th overall, with a heat average of just 1.725 for Gdansk, is probably not what he or others expected from the 2015 Danish SGP champion.
At least in the Elitserien he did the job required of him when he returned to Piraterna and lead the bottom placed team with a 1.952 heat average. But that that made him only the sixth best Danish rider with Klindt and Gdańsk teammate Rasmus Jensen above him on heat average. It all goes to shows that it was not Kildemand’s best season. 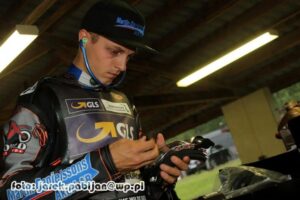